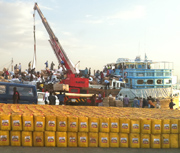 There have been significant recent developments in Somalia. The initial euphoria around the withdrawal of al-Shabaab from Mogadishu has been replaced by concerns that the conflict in and around the city will descend into messy asymmetric warfare. The Kenyan invasion of southern Somalia last week is deeply significant; it could further weaken al-Shabaab, but also could ignite a widening terrorist campaign in East Africa. This suggests that there will likely be a spasm of violence before al-Shabaab is finally defeated. Key to this defeat will be cutting the economic basis for the organization’s survival: control of the port of Kismayo, south of Mogadishu.

The tone of the conflict has changed, and a growing, if still very cautious, consensus has been building that, for the first time in years, there is at least the prospect for a negotiated settlement to the war, in the context of a wider regional military campaign which may draw in Ethiopia. The prolonged conflict over two decades has created a burgeoning group of economic and financial interests that have become linked to instability, corruption, and lack of governance. That is now ultimately the Gordian’s knot that will have to be cut if sustainable peace is to be achieved.

It is possible to be cautiously optimistic about political progress in Somalia. After years of stalemate and international despondency, a series of events in the last months seem to be changing the playing field. The withdrawal of al-Shabaab from Mogadishu, the degree to which the drought weakened and exposed the organization, and the unexpected incursion by Kenyan troops over the border into Somalia have made things more complex, but also more dynamic. The terrible suffering that the drought has brought has also highlighted the consequences of state failure.

When I visited Somalia this past September, I was struck as much by the apparent wealth—not all derived from piracy money—as by the volume of commercial activity that is underway. This is both an opportunity and a challenge; an opportunity in that Somalis’ entrepreneurial spirit and global network hold the prospect for rebuilding the shattered country. And a challenge in that many economic interests have merged with the conflict; making money relies on instability or the maintenance of local power, and the spoils that al-Shabaab earned will be quickly absorbed by new players. Although the extent of corruption within the Transitional Federal Government (TFG) is now of key concern to donors, foreign players attempting to push the political process forward understand too little of these arrangements, and it is critical to do so if peace is to be finally achieved.

Recent political and military developments related to the Somalia conflict are shaking up established relationships, including in the economic sector. The long conflict has built a network of economic beneficiaries, and a change in the pattern of the conflict is liable to affect and change economic interests. The biggest losers plainly will be al-Shabaab, but local businessmen will be quick to shift allegiances, reinforcing the old narrative of the Somali conflict—military and political power is reinforced by an alliance with economic players, both licit and illicit.

One of the most immediate consequences is a shift in economic dynamism to the north. This was plain to see at Bossaso, Somalia’s main port city that lies 250 km east of the tip of the Horn of Africa. Here, dhows (traditional Arab sailing vessels) from the Gulf line up to take on board livestock and piles of provisions, and are guarded by weary-looking soldiers toting AK-47s. The port has the feel of a bustling commercial bazaar, and is being dredged to allow larger ships to enter. The first ship to benefit from this, a World Food Programme Charter ringed with barbed wire to prevent pirate attacks, unloaded its bags of food in late September. Just down the coast, gangs engaged in the smuggling of desperate people from the country ply their trade from sandy coves.

The proceeds from these economic activities dwarf anything made from piracy—often reported in the Western media to be the mainstay of the local economy—but at the same time, their profitability has helped sustain the conflict in the context of a failed state. Economic activity is not possible in these conditions without violent protection. Far from being unregulated, the local arm of the law is long and brutal when local economic interests are at stake. The West may be frustrated with the lack of action from local Somali authorities against piracy, but when a ship packed with livestock was taken in September, the response was rapid and violent. Within a day, the vessel and its cargo was returned, and the pirates were killed.

Indeed, the biggest Somali export is livestock, loaded onto dhows for transport to the Gulf where the animals are slaughtered. The trade has picked up recently, and travelling on any of the main routes through Somalia brings sights of these trucks packed with animals heading for the ports. Local traders say that a recent lifting of a ban by Saudi Arabia has increased the demand. Grazing in the northern regions of the country is still good despite the famine in the south, and so local herders are gearing up to meet the demand, which they hope will increase further. Tourists enjoying the pleasures of the Gulf are liable to be eating Somali meat cooked on Somali charcoal—another money maker with perverse effects.

Prior to the recent bout of conflict, charcoal export volumes from southern Somalia were estimated at 3.5-4.5 million sacks per year, an extraordinary amount for a country literally riven to bits by conflict. Each bag is sold for some $15, with 90% of the charcoal trade passing through the al-Shabaab-controlled port of Kismayo.

But the consequences have been severe. While the export of charcoal may have sustained the local economy, it is being blamed by locals for the famine. The once-green acacia forests between the Juba and Shabelle rivers have been decimated—the region has become a dust bowl—and resulting soil erosion has made the area unsuitable for grazing. The charcoal trade resembles a well-controlled criminal enterprise with a few players reaping huge profits, and al-Shabaab has been a long-term beneficiary.

For another commodity—sugar—Somalia acts like a free-trade zone with Kenya. Corruption on the border with Kenya means that few duties are paid. The total volume of sugar imports in southern Somalia is estimated between 20,000 and 40,000 metric tons, imported via Kismayo and other ports, and smuggled overland to Kenya, where customs officials benefit from corrupt payments from a trade which benefits the very organization that Kenyan troops are now fighting. Most of the sugar imported to Somalia is supplied by international sugar and commodity trading houses, and coordinated by a relatively limited number of Somali traders based in the United Arab Emirates.

These three markets alone—the mainstays of the Somali economy—generate enormous economic interests, and they are tightly controlled by a relatively small number of businessmen. Well-organised criminal networks with links to al-Shabaab in the south and in the north, with other political protectors, are engaged in multiple smuggling operations, including the moving of people for profit. Their operations can only survive if they are shielded and Somalia’s savvy businessmen ensure that they are on the right side of all who hold political power, including al-Shabaab, regional administrations, and the perennially weak TFG.

In this way, economic interests blur the boundaries between the groups involved in the conflict. Payoffs and protection payments mean that armed groups have the resources to hold onto power. This, combined with the pervasive corruption that affects the country’s often externally-based national politicians, suggests that understanding how these forces sustain the conflict—current levels of economic activity, commodity flows, and corruption —is essential for those attempting to facilitate the peace.

As the conflict fragments and becomes more complex—and al-Shabaab’s economic foundations crumble and reconstitute themselves around other players—an understanding of how economics has sustained the war may be essential to ensure that Somali’s business interests fall on the side of peace and don’t profit further from instability.

About the photo: A dhow unloads at Bosasso port, September 2011. Photo by Mark Shaw