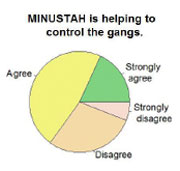 This morning the UN Security Council voted to renew MINUSTAH’s mandate for another year. Haitian President Michel Martelly came out strongly in favor of this during a speech at the General Assembly, but troubling sexual abuse scandals, a cholera epidemic attributed to UN peacekeepers, and violent protests against MINUSTAH have given the media reasons to depict them as a detested foreign occupier.

What do Haitian citizens think? In August 2011, we—Grant Gordon and Lauren Young, PhD students at Columbia University—conducted a survey with a representative random sample of 600 adults in metropolitan Port-au-Prince to find out. The primary purpose of the survey was to analyze the determinants of how citizens in a host country to a peacekeeping mission form opinions towards peacekeepers. [Download pdf of survey results.]

In light of the vote on MINUSTAH’s mandate renewal, we have done a preliminary analysis on Haitian opinions of MINUSTAH. The opinions described here come from the first methodologically rigorous household survey of Haitian opinions towards MINUSTAH.

Importantly, these opinions are not only held by the wealthy, but by all income levels equally. Sizeable majorities believe that MINUSTAH is helping to control the gangs and reconstruct the country after the earthquake. Perhaps most impressively, 60% say that they are willing to cooperate with MINUSTAH by providing information.

However, the assessment is much less rosy when it comes to internal accountability and the prevention of abuses. A plurality of respondents believes that MINUSTAH does not have strong enough systems to protect Haitians from abuse. Large majorities—60 and 80%, respectively—believe that MINUSTAH soldiers are punished differently based on the rank of the soldier or the status of their accuser.

Lastly, there is a huge gap between what Haitians perceive MINUSTAH’s mandate to be and what they want it to be. A majority believes that the missions mandate is to provide security, but almost as many would like the mandate to be primarily post-earthquake reconstruction of the country.

This evidence suggests that today’s renewal is seen as a good thing, not only by self-interested outsiders but also by the majority of Haitians. It also points to the need to strengthen internal accountability, and publicize mechanisms by which Haitians can report abuses and past cases in which fair punishment has been dealt out. By showing Haitians that it is cleaning up its own act, MINUSTAH may be able to get the local support it needs to make this mandate renewal the beginning of the end of the mission.