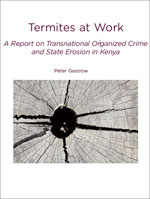 The report, published by the International Peace Institute, caught the attention of Kenya’s Prime Minister Raila Odinga, who addressed the report’s launch event in Nairobi on October 4th.

Speaking at the event, author Peter Gastrow said, “For many developing countries and fragile states, powerful transnational criminal networks constitute a direct threat to the state itself–not through open confrontation–but by penetrating state institutions through bribery and corruption and by subverting and undermining them from within.”

“Governments that lack the capacity to counter such penetration, or that acquiesce in it, face the threat of state institutions becoming dysfunctional and criminalized, and of the very foundations of the state being undermined,“ he said.

Mr. Gastrow elaborates on this in the report:

“While to the onlooker Kenya appears to be in a relatively healthy state, it is in fact weakening due to a process of internal decay. Endemic corruption and powerful transnational criminal networks are “white-anting” state institutions and public confidence in them. Termites are at work, hollowing out state institutions from the inside. As a result, development is being hampered, governance undermined, public trust in institutions destroyed, and international confidence in Kenya’s future constantly tested.”

The report also notes that the international community is largely focused on West Africa, believing that transnational organized crime in East Africa has not been of much concern. “The region appears to be in a slumber as far as the realities of organized crime are concerned,” the report says.