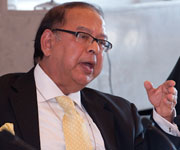 Ambassador Iftekhar Ahmed Chowdhury was Foreign Advisor (Foreign Minister) of Bangladesh from 2007 to 2009. During his four decades of public service career, he has held the posts as Ambassador and Permanent Representative to both New York and Geneva. He is currently a Senior Research Fellow at the Institute of South Asian Studies.

“What is happening in Pakistan is a sad story,” he said during this interview. “You have a situation which is also dangerous, because Pakistan reportedly has 105 or so nuclear warheads. It’s a very powerful country militarily. It has at least 700,000 men in arms. It has one of the largest conventional militaries in the world. And it is a country which feels itself under existential threat.”

Ambassador Chowdhury also discussed other geopolitical challenges such as Asia’s rise to global power; the state of multilateral cooperation and regional integration in the region; and what it means to be a unified Asia in the 21st century.

“The whole world in flux,” he said. “Ever since the time of Heraclitus, we have believed that you never step into the same river twice, and you don’t do it in Asia as well.”

Ambassador Chowdhury was interviewed on October, 20, 2011 by Francesco Mancini, Director of Research at the International Peace Institute.

Francesco Mancini (FM): Thank you, Ambassador Chowdhury, for taking the time to speak with the Global Observatory. Today, we would like to survey with you key geopolitical challenges in Asia, particularly in South, Southeast, and East Asia.

Geopolitical clout and economic might is shifting to emerging countries in the East and the South. US Secretary of State Hillary Clinton writes in the current edition of the Foreign Policy that the US must fully commit to exercising a leadership role in Asia. How do you see these geopolitical changes in the region in the next few years?

It’s absolutely true that there is a shift occurring at this point in time in global power. This shift to Asia is not something new. Asia has always been, in the past, in the pre-colonial days, in the center of global power. It has been the cradle of ancient civilization, both Chinese and Indian. Therefore, what we today call ‘the rise of Asia’ generally, is actually a re-rise. It’s rising again. This is an inexorable historical process that began some time ago and is coming to fruition now.

The great challenge for the world is to be able to manage the rise in a way that is positive. A relationship with the United States is a critical element in this rise, or re-rise. I shan’t call it leadership perhaps, but what is called for is partnership, because there are many ways in which Asia leads as well. The idea is to work together towards goals that would lead to greater global economic and political stability.

FM: What, in your opinion, are the key challenges that the region is facing and will have to face in the next decade?

IC: There are both political and economic challenges. Asia’s re-rise is largely economic. India and China are leapfrogging the economic advance in ways that are truly remarkable. At the same time, there are challenges of great poverty in Asia. There are swaths of India which are poorer perhaps than sub-Saharan Africa. So, one the one hand, you have wealth; on the other hand, you have poverty.

At the same time, Asia is developing, or has, the intellectual resources to address these questions of poverty. Think about Bangladesh for instance, which has been able to alleviate poverty, expand women’s empowerment, education, etc., in a way that is truly remarkable. This kind of progress on socioeconomic indices is happening across Asia.

FM: Many of the challenges you mentioned have a transnational dimension. Nevertheless, multilateral cooperation and regional integration is still quite weak in Asia. How can international cooperation be strengthened, and how can this be reconciled with states’ concerns over limitations to state sovereignty?

IC: The West, mainly the European countries, have experienced the kind of state sovereignties that you are talking of for a long time. Since 1648 as a matter of fact, the Treaty of Westphalia, which was the watershed point in the evolution of nation states.

For Asia, this is a largely new experience. Most of Asia went under colonial domination for much of the nineteenth and half of the twentieth century. So, the nation-states are still not as sharp as they are in the West. There are still crossnational, ethnic connections—Afghanistan-Pakistan for instance, the ‘stans’ in the north for instance, as well as in South Asia. So sometimes there is an intellectual and political confusion as to whether to stress commonalities between nations, as is being done in Europe, or to stress the distinctiveness, in order to underscore individual sovereignties. Those are some of the theoretical problems that nation states in Asia will have to address and resolve.

FM: Do you see a European model as something that can inspire some kind of unity? Not necessarily across the entire continent, but in specific areas of Asia. Or is there still a very long way to go?

IC: This is an interesting question, in the sense that there is a lot of Asian thinking focused on this. We, in Singapore, have done a lot of thinking in this regard; Kishore Mahbubani has written profusely on this. We talk of an Asian home concert. Ultimately, there would have to be linkages among the great Asian civilizations in a way that the Europeans have reconciled differences among themselves and are leading to one Europe. This is more difficult to achieve in Asia, because the Asian civilizations are more distinct than what France and Germany were, or Italy for that matter, in the past. Chinese civilization, Russian civilization, Indian civilization–these have been distinct.

The idea is to be collaborative and cooperative. To strengthen the concept of ‘Asianness’. There are those who believe Asia itself is a Greek concept to start with. Today we are redefining Asia, and in some ways developing an Asian identity which was not always there.

Those are some of the challenges. The ultimate fruition of having a united Asia, in the way that Europe has evolved into already is still a distant dream, but not necessarily not achievable. It is achievable.

FM: You’ve already mentioned a couple of times, Afghanistan and Pakistan. Let me ask you a specific question on these two countries. They have experienced conflict and instability for many years now. Both countries face, and are sources of, threats from terrorism and violent extremism. Where do we go from here? What are the effects of worsening US-Pakistan relations and of a closer Afghan-Indian relationship?

IC: This is a very complex situation. What is happening in Pakistan is a sad story. Pakistan was used, and effectively so, by the West, to be frank, during the Russian occupation. Pakistani support was essential to bring about an end to Russian presence in Afghanistan.

After that, many Pakistanis feel they were dropped like hot potatoes and left with the consequences of the Afghan crisis. As a result, you have this proliferation of weapons in Pakistan. You have these rivalries among Pashtuns and others. The consequent rise of radicalism is also largely attributed to the political events of the 1970s. You have a situation which is also dangerous, because Pakistan reportedly has 105 or so nuclear warheads. It’s a very powerful country militarily; it has at least 700,000 men in arms. It has one of the largest conventional militaries in the world. And it is a country which feels itself under existential threat. It’s an unsated state, and therefore hugely problematic.

Now, I think we are looking at a period in Afghanistan where the American withdrawal will take place. There will be Western withdrawal, and this is something that, I think, is beginning to become an Afghan aspiration. They are looking to a point in time when foreigners will have left the country.

In that case, what kind of Afghanistan shall we see? It has to be an Afghanistan that is committed to models of development, models where there is spread of education, where women are empowered. Culturally, there will be resistance to any initiatives that look at these as objectives. There would have to be interventions—not military interventions, most certainly not—but social and economic interventions by the rest of the world supporting the development of Afghanistan into an effective post-conflict nation.

It will not be easy. There has always been the history of the ‘Great Game’ in Afghanistan when Afghanistan has drawn rivalries from among the big powers all around it. But today we have the United Nations—institutions which are mandated to ensure that national rivalries do not become sources of conflict—to the disadvantage of populations, to the peoples of the world for which this institution, the United Nations, has been built.

FM: Finally, 2011 has been the year of dramatic, transitions in the Arab world. In Asia, Malaysia has seen a number of reforms in recent weeks. And at the moment, the world is eagerly watching Myanmar, to see what the developments will be in that country. Can we say that we can see pockets of an Asian spring, in some of these countries?

IC: Doubtless, parts of Asia are in the cusp of great changes. The Arab world, certainly. The Arab Spring is a very apt expression, because many Arab countries have been under the yoke of, not foreign, but their own domination by elements within the system. Parts of Asia we are talking about—South Asia, Southeast Asia—are today, largely, democratic in any case. So, these two situations are not comparable. In other words, what the Arab countries are striving for perhaps has already been achieved in large parts of Asia.

But there is no end to human aspirations. Naturally, what we want to see in Asia is the strengthening of democratic institutions—which largely broadly exist in many of the countries that we are talking about—in a way that governments reflect popular values, that economic advance takes place, that women are not suppressed, and that states learn that it is better to live with an uncomfortable idea, rather than to try and suppress it. That is the essence of democracy.

Yes, changes are taking place everywhere, which is not different from any other part of the world. The whole world in flux. Ever since the time of Heraclitus, we have believed that you never step into the same river twice, and you don’t do it in Asia as well.

FM: Ambassador Chowdhury, thank you very much for your time.