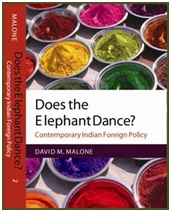 Geography is the second key determinant. Malone highlights India’s troubled relationships with many of its neighbors in the region, noting that Pakistan, while worrisome, is not the key concern. Instead, a lot of India’s concerns are aimed at China.

Finally, Malone describes India’s remarkable economic development as a key factor influencing its growing “game-changing” capabilities. The high growth now typical of the Indian economy is still a fairly recent development, and was triggered by the far-reaching reforms that liberalized the Indian economy following the balance-of-payments crisis in 1990-91.

In conclusion, Malone identifies three main leitmotifs of Indian foreign policy. The first is its quest for autonomy–it is perennially difficult to make India an ally. The second is strategic restraint, a kind of prudence in all of its actions. Finally, the overarching priority is economic prosperity and progress, which trumps other concerns.