The risk of confrontation in the South China Sea (SCS) is increasing as a result of recent maritime disputes between China and Vietnam. During two incidents on May 26th and June 9th, Vietnamese oil exploration vessels conducting seismic surveys were harassed by Chinese ships. This has brought to a head the long-standing territorial dispute over the areas around the Paracel and Spratly Islands in the SCS. Stephanie T. Kleine-Ahlbrandt, the China and North East Asia project director of the International Crisis Group (ICG) in Beijing, believes conflict in the SCS is a distinct possibility. “Given the current highly charged situation and proliferation of maritime patrol boats in the region, a clash between claimant country vessels has potential to devolve into a shooting incident – for example, between Vietnam and China,” Ms. Kleine-Ahlbrandt told the Global Observatory during a June 21st interview.

The stakes are high in the SCS. The murky legal environment, vital economic interests, and power politics produce serious volatility and the risk of conflict escalation. Ms. Kleine-Ahlbrandt warns with urgency that it is incumbent upon the countries involved, particularly China and Vietnam, to defuse the tensions, given that “the most critical risk factor for conflict in the region is accidental escalation. 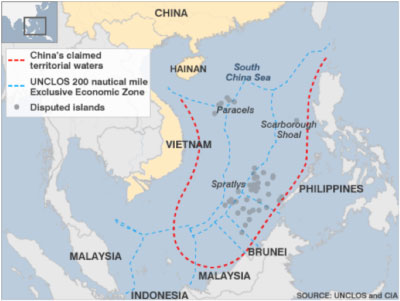 There are three main reasons why the areas around the Paracel and Spratly archipelagos are so heavily contested:

1. Natural resources: Vast oil and gas reserves are suspected in the areas surrounding the two archipelagos.

2. Geopolitical competition: With China rising as a naval power, the current dominant power in the Pacific Ocean, the United States, is looking for ways to maintain its influence. China is looking to push back and prevent containment of its naval expansion.

3. Access to fish stocks: The area is home to significant fish stocks providing livelihoods for large communities in the riparian states. Brunei, China, Malaysia, the Philippines, Taiwan, and Vietnam are claiming all or parts of the contested territory, though China’s claims are the most extensive and cover almost the entire SCS. China argues that the island groups have been part of Chinese territory for over 2,000 years. And although China is a signatory to the UN Convention on the Law of the Sea [UNCLOS], Ms. Kleine-Ahlbrandt noted that “its still ambiguous claim is not grounded in the international law of the convention.” Vietnam contests China’s position, claiming to have ruled over the islands since the seventeenth century and that the islands fall entirely within its territory. Brunei, Malaysia, and the Philippines invoke geographical proximity and say that part of the islands fall within their Exclusive Economic Zones (EEZ), in accordance with the UNCLOS. The risks of conflict have been exposed on multiple occasions in the past. In 1974 and 1988, the dispute turned bloody when the Chinese and Vietnamese navies clashed in the SCS. During these confrontations, China gained full control over the Paracel Islands as well as over parts of the Spratly Islands, and more than 70 Vietnamese sailors were killed. According to Ms. Kleine-Ahlbrandt, “These competing claims, along with a history of confrontations, make the SCS one of the world’s most sensitive regions.”

The path out of the current crisis is fraught with difficulties. Geopolitical competition, overlapping claims, and disunity among ASEAN states combine to create a complex overall state of affairs. At the geopolitical level, competition between China and the United States for naval supremacy in the Pacific Ocean and the SCS looms large. “China is deeply concerned about tightening security ties between the US and countries in the region,” Ms. Kleine-Ahlbrandt said. “China’s recent provocative actions in the SCS and increasing naval capabilities make other claimant countries doubt Beijing’s proclaimed commitment to the peaceful solution of maritime disputes.” Ms. Kleine-Ahlbrandt said that “all of this strengthens US determination to multilateralize the issue of the South China Sea as much as possible.” China is bent on resolving the issue bilaterally in order to maximize its leverage over the smaller countries involved, while other countries, including Vietnam and the United States, are supporting a multilateral approach. A multilateral solution would pit China against a group of nations bargaining collectively and considerably weaken China’s position. Given the underlying geopolitical factors, China is particularly reluctant to accept outside intervention. However, a multilateral approach is unlikely to gain any traction from the outset, despite U.S. Secretary of State Hillary Clinton’s offer in August 2010 of U.S. mediation and Vietnam’s subsequent advocacy for a multilateral approach. The U.S. is likely, however, to continue to try and play a central role. Foreign Policy quoted the U.S. chief of naval operations, Admiral Gary Roughead, who emphasized the importance of continued U.S. presence for stability in the region and even raised the issue of U.S. accession to UNCLOS in order to lend its efforts greater credibility. Disagreement within the region remains a key obstacle to progress. “ASEAN members remain divided over the SCS,” said Ms. Kleine-Ahlbrandt, noting that these countries “have divergent economic and security interests, from Vietnam’s hard line claims to Malaysia’s economically driven pragmatism and Myanmar’s rubber stamp for China’s position.” “This makes a collective ASEAN position highly unlikely,” she said.